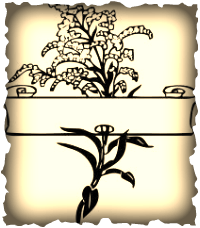 Excerpts From When You Speak My Name, by Tish Cook.

Grant’s Farm was more than just a horse farm. She remembered how the kids squealed with delight when she and Mike took them on their first tram ride through Deer Park on the grounds. North American bison, African zebras and European antelope were among the hundreds of animals that roamed the area. The price was right - free admission, and two free beers. She liked the admission - Mike liked the beers.

She took Interstate 270 to I55 south, then Highway H at the town of Festus, and finally to Highway 21. She could have driven the new Highway 21, its four lanes moved traffic along faster, but today she wasn’t in a hurry.

The map identified Highway 21 as a scenic route. Julie liked to call it Mother Nature’s yellow brick road, its narrow path gently curved through the rolling Missouri hills and skirted the outer edge of one of the many areas designated as the Mark Twain National Forest. The forest, named after the author, dotted the southern half of Missouri with nine different forested areas. Oregon County, where Julie was headed, boasted over a hundred thousand acres of it.

Today’s meander in the wilderness was exceptional. Thousands of wildflowers, among them red clover, wild plum, pink prairie rose and blue morning glory, lined both sides of the narrow, two lane winding road, each wanting to share its own seductive scent with the world. Julie never wore perfume; most were too phony for her. She took a deep breath. Wow! Now I could wear this. Too bad nobody can copy Mother Nature.

The massive oaks, pines, and maples - trees that had been growing in the area for hundreds of years - blanketed the sky with their leaves and blocked the sun’s harsh rays; the inside of the bus remained relatively cool. But Julie had also traveled this road in the fall when those same leaves became a stunning quilt of color. Brilliant reds, deep oranges, bright yellows and dark muted browns never ceased to leave her breathless. She loved this forest - regardless of the season.